At the 2016 Concorso d’Eleganza BMW celebrates 50 years of the 2002 turbo - with an extraordinary BMW 2002 Hommage. The car is a re-imagined version of the design icon from the late 60's. 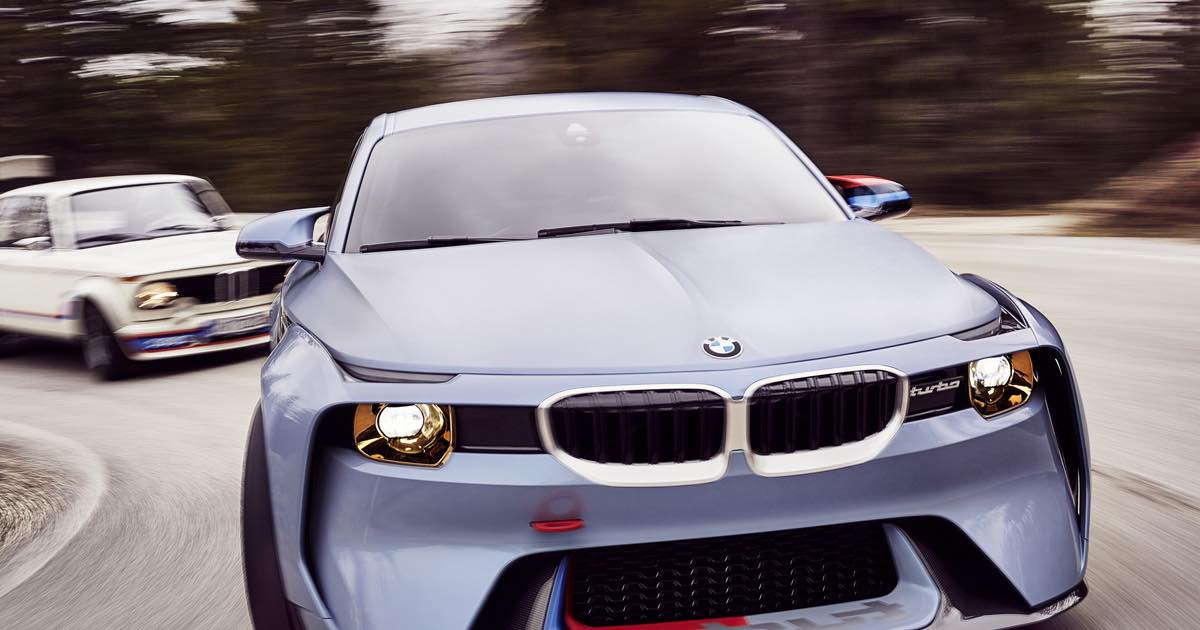 For BMW this is a very special year. Not only that the hole BMW Group celebrates its 100th birthday. At the 2016 Concorso d’Eleganza Villa d’Este BMW also pays tribute to one of the most significant models in its history. The BMW 2002 Hommage celebrates the extraordinary feats of engineering behind the BMW 2002 turbo – and re-imagines them as a design study for our times.

“Exactly 50 years ago, the 02 range kick-started an era of success for BMW. This compact coupe is one of the vehicles which made the brand what it is today,” explains Adrian van Hooydonk, Senior Vice President BMW Group Design. “The 2002 sat at the top of the range and was the first series-produced car anywhere in Europe to come with turbo technology. That set the seal on the coupe as a genuine sports car. At the same time, the 2002 turbo was at the technological vanguard of engine development at BMW. The BMW 2002 Hommage is our way of raising a glass to all these achievements.”

The eye-catching BMW 2002 Hommage lies low against the road. It combines the traditional design of the legendary 2002 series with modern elements, best known from recent Concept Cars as well as production cars. Based on the BMW 2 Series, the Hommage features compact proportions, complete with long wheelbase, short overhangs and prominent “shark nose”. Aerodynamic details like the large spoilers at the front and rear team up with the profusion of air intakes to optimise airflow around the car and maximise downforce in every driving situation.

Inspired by the signature chrome strip that ringed the 02 in its day, a horizontal carbon band wraps itself around the shoulderline of the BMW 2002 Hommage and splits the body visually into separate sections. The upper tranche of roof, bonnet and boot lid has matt paintwork to prevent reflection of the sun’s rays –
in a reference to racing cars of yore. The lower section creates a definite contrast, with its high-gloss paintwork.
The Space Race Metal paintwork drapes itself over the BMW 2002 Hommage like liquid metal. In both its matt and gloss form, the light metallic blue finish changes in appearance from a brightly fluorescent blue to grey, depending on the incidence of light, and lends the surfacing a dynamic sense of depth. As a result, the car’s whole body brims with power and energy.

A particularly striking feature of the car’s flanks are the voluminously moulded wheel arches, a recall to the homologated version of the BMW 2002 turbo, which needed broad extensions bolted onto its body to accommodate a significantly wider track.

The front end of the BMW 2002 Hommage is a confident and extravagantly dynamic affair; its styling bridges a gap of 50 years in combining the characteristic, horizontal graphic of the 02 range with modern elements of BMW design. The front end is framed visually by the prominent wheel arches. And the wide track and low-slung body provide an ample canvas for generously-sized surfaces.

The familiar BMW kidney grille takes the form of a low-standing, connected unit, offering a flesh slant on the kidneys’ historical rendering as a cohesive design element.

Like the BMW 2002, the BMW 2002 Hommage also has two single headlights that provide the striking front end with its outer limits. The headlights are bordered by reflectors, whose gold colouring is a pointer to the “golden” 50th anniversary of the BMW 2002’s launch. The reflectors also reprise the yellow hue commonly found in the headlights of racing cars back in the day.

The large front apron, a stylistic nod to those models of the 1970s, shortens the visual distance between the BMW 2002 Hommage and the road and shines a bright spotlight on its driver focus. The BMW Motorsport livery of the front apron and its “turbo” lettering in mirror writing casts the mind back to the original decals of the 2002 turbo, as does the exterior mirror cap on the driver’s side. Accent surfaces in exposed carbon mark the point where the front apron and side skirts hand over to the road, and also provide a technically alluring contrast to the body-coloured surfaces.

The rear-end design of the BMW 2002 Hommage also calls on elements of the 2002 turbo. For example, the horizontal sub-division of the car’s generous surfaces and its clear lines make a width-emphasising and thus suitably dynamic statement, laced with modern feel. The form of the rear lights is inspired by the same historical blueprint. The almost rectangular lights provide a stylistic border for the rear end. The glass covers have a contemporary black-panel look and only offer a view of the inner workings when the lights illuminate. All you can see when they are dormant is an unbroken black surface. As at the front of the car, this strengthens the impression of a strip wrapped around the car.
The BMW logo to the right of the license plate between the two rear lights is likewise a characteristic element of 02 rear styling. 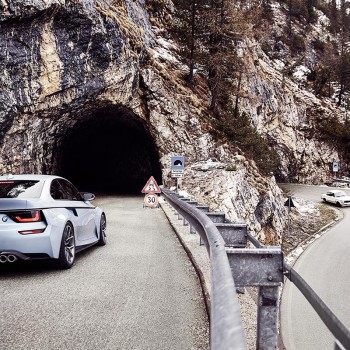 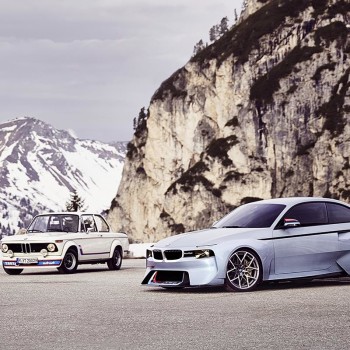 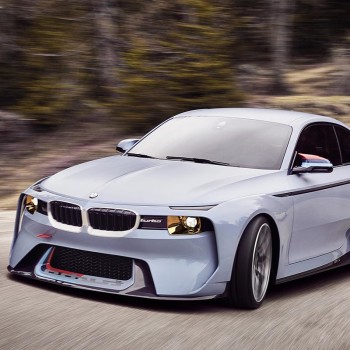 BMW’s fresh interpretation of the BMW 2002 adopts the form of a compact sports coupe in the classical tradition of BMW Hommage cars. But more than that, the BMW 2002 Hommage represents a clear statement of how pure driving pleasure is defined in 2016.

BMW did not lose any word about the technical base of the BMW 2002 Hommage, but we expect that it is a BMW M2. However, don’t expect to see a production version of the car in any time – there will be none. But chances may be well, we see some stuff from the concept in any tuning kits coming to market – even not from BMW itself …