And action: BMW heats up cold Detroit with the world premiere of the BMW M2 on the 2016 NAIAS. Here are the first videos of the new M car - right to see and hear it in action! 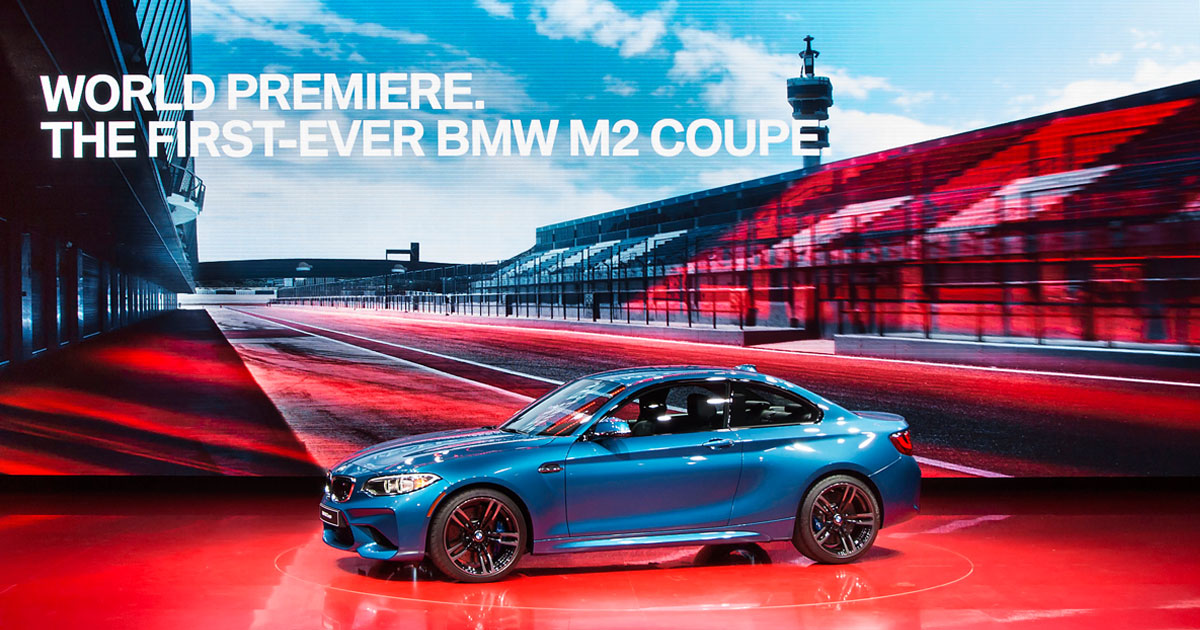 There are still few days left, until the first journalist are able to experience the new BMW M2 on track. The first test drives will be later this month.

But right now, we make it possible for you to see and hear the BMW M2 in action!

BMW MOTOR SHOW BLOG shows the clipping from the press conference, where we see the M2 in motion – and where we can hear the new coupe! Therefore, we do not want to deprive you the recording of a second video, with a complete round of the stunning car on the turntable of the BMW stage here at the North American International’s Automobile Show – NAIAS – Detroit.

Live in Detroit – the BMW M2 on the turntable

Here’s the speech of Dr. Ian Robertson (HonDSc), Member of the Board of Management of BMW AG, Sales and Marketing BMW as a transcription from the video.

Good morning, it’s great to be back in Detroit! What a great way to kick-off our centenary year! 100 years ago, the roots of the BMW Group began.
Today, we enjoy much success as “The Ultimate Driving Machine”.

This dynamic car – the BMW 2002 turbo – symbolizes an era that was very special for BMW. The BMW 02 Series put BMW on the map here in the US and it made the company what it is today.

Five decades ago, the 02 Series introduced the world to a sporty, lightweight and compact sedan, and it proved that practical, reliable cars could also be a lot of fun. The most powerful car in the series was this one – the 2002 turbo. What our engineers did back then, has made it a legend today. With a combination of know-how from Motorsport and groundbreaking technology, the 2002 turbo was Europe’s first turbocharged production car. Customers were thrilled by the 170 BHP, maximum speed of 132 miles per hour (211 kph) and acceleration from 0 to 60 (100 kph) of around 7 seconds.

Most importantly, the 02 Series established BMW as a legitimate contender in the US. For most Americans, the 2002 was the first BMW they had ever seen on the streets. It attracted a strong following and is now a cult classic among BMW enthusiasts. Its success paved the way for the launch of BMW of North America in 1975.

„Aus Freude am Fahren” and “The Ultimate Driving Machine” were largely based on the sporting pedigree the company earned on the strength of both the 02 Series and the 3.0 CSL. Today, you will find that DNA in every vehicle we create.

Demonstrating that this commitment is alive and well… we would now like to present the world premiere of the new BMW M2 Coupé!

Hear that engine and instantly you realize that BMW M cars are a breed apart!

Ladies and Gentlemen, the first ever BMW M2 Coupe!

It is “the very soul” of what BMW stands for.

The first-ever BMW M2 is not only the legitimate successor to the BMW 1 Series M Coupe – it also continues the tradition of compact, high-performance sports cars that started with the 2002 turbo. It is characterised by a highly emotional M design language. A bold, Motorsport-inspired appearance with an exceptionally wide stance which reflects its powerful presence.

The strong heart of the BMW M2 Coupe is its three-litre straight-six Twin-Power Turbo engine which delivers 365 brake horsepower and a sprint from 0 to 60 in just 4.2 seconds. The new BMW M2 Coupe has all it takes: Extrovert styling, outstanding performance with rear-wheel-drive agility, and lightweight aluminium front and rear axles from the BMW M3/M4 models.

Market launch is April this year and I am absolutely sure that U.S. customers will especially love this car. And I am very confident that the BMW M2 Coupe will continue the BMW M success story.

BMW M had an outstanding year in 2015! Full-year sales of BMW M vehicles worldwide were up nearly 65 per cent, totalling around 35,000 units. And sales of our ever-growing range of BMW M Performance vehicles grew over 16 percent last year to total around 28,000 units. And I am delighted that Americans are such big fans of our BMW M vehicles – it is clearly our largest market.
BMW M’s strong performance last year helped contribute to the most successful sales year ever for BMW and the BMW Group.